Have you been served a party wall notice or party structure notice?

Have you been served a party wall notice or party structure notice? 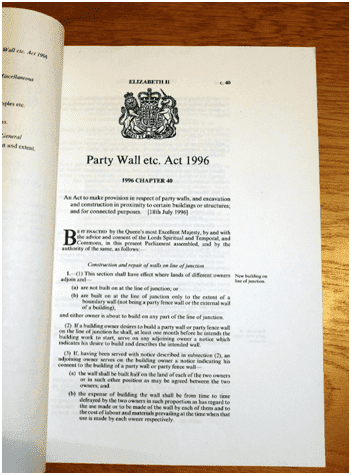 You arrive home to find a notice which is in the form of a letter, under The Party Wall etc Act 1996. You are classed by your neighbour, who is intending to carry out some work, as an ‘Adjoining Owner’.

Your neighbour, the person carrying out the works, then becomes the ‘Building Owner’ under the Act.

What are your options? You can ignore the letter/notice, but that will have consequences. You can sign the Acknowledgement letter, enclosed together with the Party Wall notice, and agree to the works, but that also has consequences. Or you can Dissent or disagree and that then becomes a formal dispute between you and your neighbour.

Not all cases are the same, in some cases the Building Owner usually next door, will want to construct an extension, modify or amend a party structure, or build very close to your building’s foundations. They don’t even have to cut into the party wall for the Act to be triggered, which is why the Act has the ‘etc’ bit in the title.

You don’t usually need a solicitor to make the Party Wall etc Act 1996 work for you. Qualified and experienced Party Wall surveyors are empowered to carry out the provisions of the Act. But you cannot act for yourself. Not even a chartered surveyor is allowed himself to act as Party Wall Surveyor if the matter is related directly to his or her own property. There always needs to be a degree of impartiality.

Agreeing to the works

Although it is the simplest option initially, signing an agreement to the proposed works means that the Building Owner(s) may proceed within a set timescale to start work, and there is no real check on your interests during the work. This option is really meant for very straightforward work, which is simple in content. You will need to be clear that the works listed are the actual works to be done relevant to the Party Wall Act.

It also possible that the original notice/letter served on you has been incorrectly drafted. Party Wall Surveyors regularly find that notices served by building owners or their agents are invalid due to a technicality. Could you establish that yourself? Probably not.

If the Acknowledgement letter/notice is signed and dated by you, and the original notice is flawed, then the works should not commence until the Notice is correctly redrafted and reserved on you and the affected parties. Otherwise, there can be all sorts of issues, later on.

There is another situation whereby you recognise the work needs to be done, but you want something additionally done to the party wall, so you serve a thing called a ‘Counter-notice’.

This is your legal right under the Party Wall Act to ask for some amendment to the proposals, but you might then have to contribute financially if you obtain a benefit to your property/land as a result, such as an enclosing of open space, or raising of a party wall for security or some other reason. The Building Owner must consider this request and seek advice as to whether it falls within the Act wording, and what impact it may have on their property.

Another condition could be for you to consent to works starting subject to having a written and photographic condition record of your property being undertaken by an independent surveyor before your neighbour commences works.

You cannot stop party structure works from proceeding, but you certainly can delay them if you sign the Acknowledgement notice as dissenting from the works. This forewarns the Building Owner that you are objecting, and in all probability, there will be the need to appoint at least one Party wall surveyor. The two options then, are to either agree on appointing one ‘Agreed’ surveyor to look at the party wall issues, or for each party to appoint their own separate surveyor.

What if you say you want your own party wall surveyor, who pays for that? Well, in most cases the costs of that surveyor also become a financial burden on the ‘Building Owner’ wanting the works, or alterations. In exceptional circumstances, you may have to contribute to the fees, but this is not the usual case.

Ignoring the notice just means after a few days it becomes an automatic dissent or dispute, so it does not really gain you anything. This automatic process does however, protect the Adjoining Owner from being away, and unaware of the Notice until they return home.

Simpler works may work very well with an agreed surveyor. This could be altering a party chimney stack on a roof or to rebuild or repair it. Or perhaps, repointing and cutting out and replacing damaged bricks to a shared party parapet wall which rises on the party wall line, above roof level.

An agreed surveyor option may not work so well if the works are much more involved, with alteration of structural foundations, major excavations, taking down and rebuilding large areas of the party wall or party structure, etc.

The key thing here is that each party will need to have trust in the ‘Agreed Surveyor’, for it to work efficiently. That said it is incumbent on the Agreed Surveyor to act impartially in the interests of both neighbours.

This option is more common, particularly on more complex works, or works requiring monitoring of the structure, opening up the structures, piling works and undertaking deep excavations such as basements.

Each party must formally appoint their own surveyor within a short timescale allowed, and then the two surveyors work together to come up with an agreement, and something called an ‘Award’. An ‘Award’ is a formal written agreement between the two surveyors, and binding their Principals legally, who appointed them, setting out all the key aspects of the approach to the works, relevant to the Party Wall Act. The surveyor appointed by you, the Adjoining Owner, is there to protect and safeguard your legal interests for the works.

Sometimes, Building Owners/neighbours may knock on your door and discuss their intended works with you, and then give you a letter or wait for others to serve the official notice. In no way does a friendly chat about the works, by-pass the Party Wall Act provisions.

However, it can ‘break-the-ice’ and is good practice. But you should not feel pressured to sign anything there and then. Any letter or notice needs to be left with you to take your time in understanding what is intended by the Building Owner.
You may still have some concerns, even though you may have known your neighbours for some time. No one can take away your legal rights under The Party Wall Act. You are entitled to professional advice before agreeing to anything.

Finally, if you have received a Party wall Notice feel free to contact Arun Associates on 020 8381 3910 or message us by clicking here to discuss your options at no obligation. They can guide you through the process and put your mind at ease. In most cases, when they act for you as Party Wall surveyor to Adjoining Owners and they will not cost you professional fees, as these are normally paid by the Building Owner.