My neighbour has started or completed works without serving party wall Notice. Can I appoint a party wall surveyor and have a party wall Award? 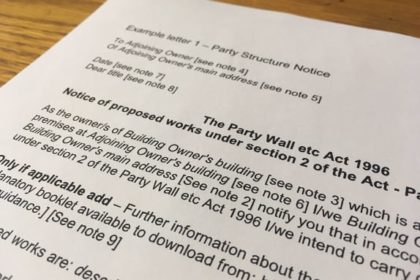 Generally, there are two scenarios where a potential problem can arise.

A situation could arise where an Award has been agreed however the neighbour has decided to undertake other notifiable party wall related works without informing the appointed surveyor(s) or yourself.

Second scenario and more common is where the neighbour has started or completed works and has not formally notified you or hence no surveyor(s) have been appointed.

The reality of the situation is that the surveyors cannot control any works for which Notice was not served and it is wrong for anyone involved with the building project to think otherwise. Therefore, lets imagine your neighbour served you with a party wall Notice in regards to a proposed rear extension however your neighbour then starts a loft conversion without notification and by doing so they have caused plaster and decorative damage on your side of the party wall. Presently there is no mechanism legally under the Party Wall Act etc. Act 1996 for the issue of damage to be resolved as your neighbours did not issue with you a Notice in regards to the loft conversion.

However, it is our opinion that this interpretation can only be workable if a number of circumstances are in favour of you (the Adjoining Owner). These include: –

So, in summary if party wall damage has occurred or your neighbour has built over your land or removed part of your building without serving Notice and fails to act lawfully then it is our opinion that the only recourse you have is one of seeing a solicitor and acquiring a legal injunction to stop works or pursue other legal action to put right the loss, trespass or any other issue that has transpired.